]
Home > About Us > Our Stories > Government and Industry Back Wood Energy

Government and Industry Back Wood Energy

Energy and Resources Minister Megan Woods, has given a resounding endorsement for bioenergy, saying “wood energy will make a significant contribution” to New Zealand’s transition to a low emissions economy, as she formally opened Fonterra’s wood energy co-firing system in Nelson yesterday.

Officially switching on the new fuel blending system at Fonterra’s Brightwater site, the Minister celebrated the first milk processing plant to co-fire with woody biomass, a change which will see at least a 25 percent reduction in its greenhouse gas emissions, equivalent to taking 530 cars permanently off the road.

Woods said she wanted to ensure that New Zealand takes full advantage of its renewable energy potential and opportunities and applauded Fonterra’s efforts in reducing emissions. “Switching from coal to wood energy is what we would like to see more of in New Zealand,” she said.

Lifecycle emissions from wood energy, she noted, are a mere 2-4 percent of those produced by coal and gas, which fuel most of New Zealand’s process heat. The Minister outlined that the Coalition Government’s heat action process plan will seek to “increase the uptake of wood energy” amongst other technology, to reduce New Zealand’s global emissions, in accordance with the Paris Agreement.

Also attending the launch, Andrew Caseley, Chief Executive of EECA, which contributed $250,000 to the Brightwater project, congratulated Fonterra for championing the move to renewable wood energy, thereby “showing large industrial processors that such initiatives will work and are part of the future”. He added that we have a significant challenge to convert these processors off fossil fuels and onto renewables, such as biomass.

Brook Brewerton, General Manager of Azwood Energy, which supplies wood energy across New Zealand and wood fuel for the Brightwater plant, said Fonterra’s forward-facing decision to co-fire with woody biomass demonstrates “that co-firing, on a commercial scale, is a viable option to reduce our emissions and meet our 2030 and 2050 targets”.

Brewerton pointed out that the wood energy used yearly at Brightwater alone will remove 2,000 tonne of wood residue from forestry slash sites, waste that would otherwise provide fuel for forest fires and contribute to erosion events, causing damage to waterways and freshwater ecosystems in extreme weather events.

“Biomass is a proven technology with a long-term, secure, mapped supply strategy,” said Brewerton, who predicts its use could drastically reduce New Zealand’s emissions in the next five years.

Brewerton said Azwood Energy, who developed the prototype fuel blending system for Fonterra, is working with schools, hospitals and industry across New Zealand to convert to the resourceful use of biomass. He said Fonterra is a key player in the transition to a low emissions economy and fuel-switching at Brightwater demonstrated Fonterra’s commitment to renewable and resourceful energy sources.

Speaking on behalf of Fonterra, Head of Manufacturing, Alan Van Der Nagel, thanked Azwood Energy for contributing to the 2017 trial, which facilitated the fuel-switching.

Van Der Nagel said widespread benefits would accrue from the Brightwater conversion, with learnings to be applied to a “longer-term co-firing strategy for other boilers across the country,” in accordance with Fonterra’s 2017 Road Map to Transition to a Low Emissions Future.

The Road Map sets out a plan for Fonterra to reach net-zero emissions by 2050 across all its sites. Van Der Nagel said the Brightwater wood-fuel co-firing conversion demonstrates what a sustained and collaborative approach between government, NGOs and business can achieve.

Brewerton later added that the containerised fuel blending system could be transported for R&D trials anywhere across New Zealand for organisations that have an appetite to economically reduce their emissions and extend the life of their energy systems. 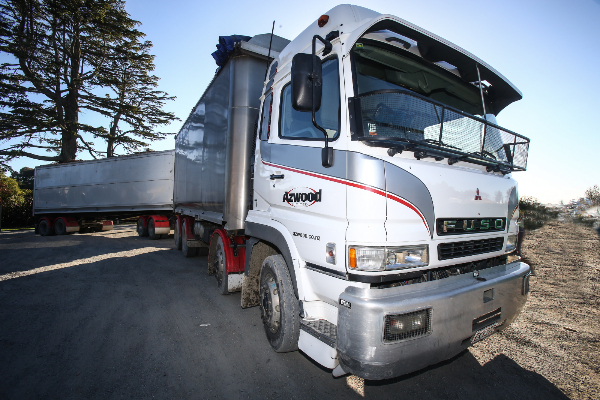