]
Home > About Us > Our Stories > Carbon Neutral Biomass 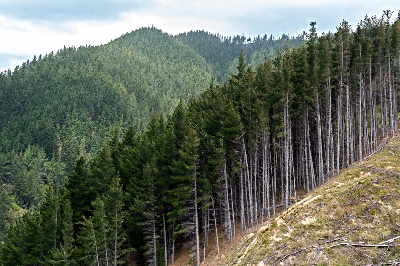 The Carbon Zero Bill - the legislation that will guide New Zealand to becoming carbon neutral by 2050 – is now out for consultation. Wood energy will play a vital role in helping New Zealand transition to a low-emissions future through conversions that replace fossil fuel use for heat and process energy.

During their growth, trees absorb carbon from the atmosphere as CO2 and convert it into stored carbohydrates. So when you burn a tree, you're only releasing the carbon that the tree had stored up, carbon that would have been released anyway when the tree died and decomposed.

About 15-20% of a tree is wasted in the wood processing industry. This residue is going to turn into CO2 whether it is burned or allowed to rot.

Most New Zealand forests being logged for industrial purposes are radiata pine, which makes up 90% of the planted production forest area. These fast-growing exotics that rapidly uptake CO2, are grown as a crop and the waste, which can be used for wood energy, is part of a cycle of harvest and replanting.

The collection of wood waste from forestry sites has the collateral positive environmental impact of preventing erosion and damage to waterways. The replanting of forests enables more carbon to be absorbed from the atmosphere through tree growth and creates a carbon neutral cycle.

New Zealand forestry practices are particularly efficient at removing carbon from the atmosphere whereby carbon is stored in building materials and plant regrowth simply recaptures the carbon emissions associated with the biomass energy produced from residues – which has displaced fossil fuel emissions.

Rapid replanting and harvesting of pine is reflected in recent statistics which show an average forest standing age of 17 years. Now supported by the recently introduced National Environmental Standards for Plantation Forestry and re-established Forest Service, New Zealand foresters will be able to better protect the environment while improving productivity and storing carbon in building products.

Furthermore, the current Coalition Government has set a goal to plant one billion trees over the next 10 years. The New Zealand Forest Owners' Association agrees the Government's target of an additional 50,000 hectares of planting a year is "optimistic but achievable".

This initiative will enhance forestry’s role in reducing the effects of climate change by storing more carbon in building materials and providing more biomass fuel for conversions.

During the recent Carbon Zero Bill consultation, it was proposed that more than 3 billion trees would need to be planted to bring New Zealand’s net emissions to zero. No matter the number, planting more trees is a given, and using the residual biomass as energy is naturally a resourceful solution to lowering emissions.

The USA’s Environmental Protection Agency recently announced that it would begin to count the burning of “forest biomass” as carbon neutral. The change will classify burning of wood pellets a renewable energy similar to solar or wind power.

The European Union declared all forms of bioenergy to be carbon-neutral in 2009. According to the Guidelines of the Intergovernmental Panel on Climate Change, C02 emissions from the combustion of biomass are reported as zero in the energy sector and biomass is therefore deemed carbon-neutral.

Wood energy or biomass, particularly that made from wood waste or forestry residue, captures carbon that would otherwise be released into the atmosphere through decomposition and utilizes it to produce energy. When this wood biomass is used to fuel industrial processes or heat buildings instead of fossil fuels, like coal and diesel, carbon emissions are further reduced.

Forest biomass is a sustainable, renewable, carbon neutral energy source. Its use as fuel is cost-comparable to fossil fuels and conversions of industrial plants to wood energy will help New Zealand transition to a low-emissions future.

A graphic illustration of forestry biomass’s carbon neutrality can be found at: https://www.youtube.com/watch?v=RCGzZIz79qM&feature=youtu.be